This page will contain examples of code from my work in ChucK, Max/MSP, and Lisp. 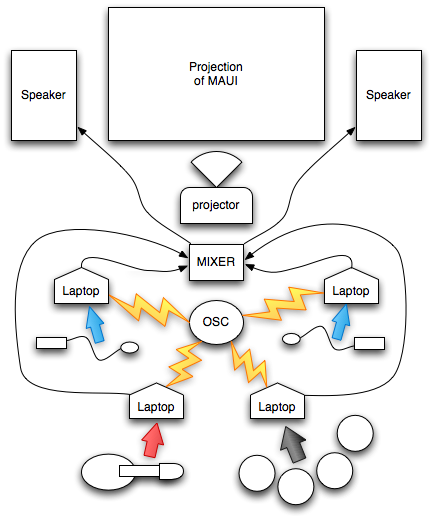 Concept:
The Digital Rock Band is a twisted take on the modern rock ensemble. The piece is designed for mandolin, drum pads, two Wiimotes, and four laptop computers. Using ChucK, the performers will be able to communicate and improvise with each other in real time by synthesizing and processing sound.

Routing:
The piece is designed for a quartet of laptop computers communicating via wireless network. OSC messages are passed between computers over the network using ChucK. This setup allows each computer to send and receive information from the other computers in the quartet.

Each computer will receive its own input data from the performer. Ronaldo will use the LiSa object in ChucK to route the signal from his mandolin into his computer. Sam will use a Roland Drum pad to send MIDI signals into ChucK on his computer. Nick and Travis will send signals into their computers from Wiimotes via Bluetooth. Once the signals from the mandolin, drum pad, and Wiimotes are read in ChucK they can be used to sound, control, and manipulate each other in a myriad of ways. The exact signal flow is yet to be determined and will continue to evolve as the composition of the piece progresses.
Both Travis and Nick’s computers read data from each respective Wiimote with a program called Osculator. This program renames the signal and sends it via OSC to ChucK. Once these signals have been routed to ChucK, they can be used to do whatever the composition needs.

Each computer will have its own audio output running into the mixer during the performance. The general routing and layout of the performance can be seen in the following diagram.

Musical/Acoustical Goals:
The premise of the piece is to emulate a “rock ensemble.” The instrumentation, mandolin and drums, is not the most traditional band arrangement, but it does loosely imitate the paradigm of guitar and drums. The Wiimotes will add their own audio via various synthesis techniques (FM and granular), as well as manipulate the audio from the mandolin. Throughout the course of the piece the roles of the instruments will change, with the mandolin perhaps taking on the role of percussion, the drums taking on a harmonic role, the Wiimotes imitating the sound of the mandolin, etc. These changes will correspond to different sections of the piece.

In addition to the instrumentation, the form of the piece will follow a typical form found in many modern rock and pop songs. This piece will be of the form AA’BA’’CA’’’B or something similar that mimics the verse, chorus, and bridge sections of pop music.

The mandolin will be turned up louder than usual in the mix in an effort to drown out the natural acoustical output of the instrument. This is done so that as the sound of the mandolin is manipulated throughout the piece, the acoustic sounds of the mandolin are lost.

While many of the technical details have been worked out, there is more work to be done, specifically with the LiSa objects and with the actual musical arrangement of sound and signals. These details will be worked out soon in order to spend as much time as possible composing and rehearsing.