We’re back from SEAMUS2011, and we barely have time to prepare for our Laptop Orchestra of Louisiana tour. Today is day full of rehearsal and tech. prep. I have a ton of academic loose-ends. My general exams still loom at the end of the tour. 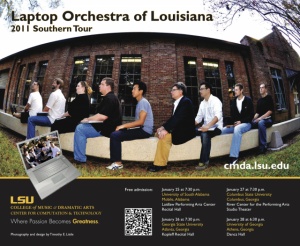 We’re making four stops in the Southeast to perform and to talk about our musical ideas within a laptop orchestra. It’ll be an experience for those unfamiliar with laptop orchestras, but for us (musicians) as well, in terms of performance, musicianship, and technological difficulties involved in a tour.